Although we have currently retired to Delaware, from 2008 through 2015 we lived in a 55+ community in South Carolina called Sun City Carolina Lakes which is a bit south of Charlotte, NC. The SCCL community had a wonderful group of volunteers who took it upon themselves to publish a beautiful monthly magazine with all kind of information about the community and the area. One of their articles each month highlighted one of the clubs within the community.

I became involved with a club for Scrapbooking and Card Making in the community and eventually became the president. As president, I was approached by one of the magazine editors in early 2010 about doing an article on our club and also submitting a few cards for possible publication. Was I ever surprised when one of my cards made the cover of the magazine! The article I wrote was also inside but to know that all the people who lived there would immediately see my work was amazing and I wanted to share it with you. I have taught many classes at Michael’s, to local geneology groups, in clubs and at scrapbooking retreats. I have also had an article published about me in a local newspaper in Pennsylvania about getting started in scrapbooking, but this magazine cover was probably my biggest thrill. The photo on the left below is the magazine cover and the photo on the right is the original card.

I also wrote a great article to go with the pictures which was published, but it is rather lengthy and I don’t want to bore you so I will just quote a few paragraphs of it:

“When members of the Cardmaking and Scrapbooking Club need a special card or handmade gift, they don’t jump into their cars. They just slip into their craft areas and stamp away. Paper, stamps, inks, adhesives and various embellishments are the tools of the trade for this group of crafters. Their labors result in wonderful one-of-a-kind cards and gifts for friends and relatives The cards have found their way around the world. As part of various church programs, the cards are sent to people who are sick or shut in. We also participated in the national Cards for Troops in November when we made cards for SCCL residents to sign. We then forwarded the cards to our troops overseas as a thank you for their service.”

“Who are these wonderful crafty ladies? They come from all walks of life and locations: a Medical Technologist from Pennsylvania, a clinical dietician from Wisconsin, a secretary from Louisiana, a real estate agent, deputy court clerk and many more. Some have tried different crafts but fell in love with stamping and never looked back. Some are new to the papercrafting world, but many have been stamping for more than 10 years. Some sell at craft shows and a couple are demonstrators for stamping companies.” Just a note……I have done several! I am the Medical Technologist and I have done many, many craft shows and I have also sold for two different craft companies, one stamping and one scrapbooking. But there is nothing better than having someone tell you they love their work or that they save all your cards from year to year.

Anyway, I ran across my saved copy of this magazine and thought it was something I would like to share with you. Just remember that just because you think you can’t do something doesn’t mean you can’t learn! Have fun and stay safe! Crafting is best quarantine activity that I can think of.

As many others on the USA east coast yesterday, we in Delaware woke up to the start of our first snowfall of the winter….about 6.5″ here in the central part of the state.  We used to live in western Pennsylvania but moved to South Carolina for 7 years, so coming back to winter again was a shock, but it’s still not as bad as in PA!  So how do I cope?  I have a cup of tea and dream of the flowers that I am going to plant this spring!  And thinking of flowers made me think about a project that I was commissioned to do for a retirement gift.  It was one of those projects that started out to be a card but kept growing and growing and ended up being………well, you’ll see!

The honoree, I was told, was a lover of flowers & butterflies so I planned to put some 3D flowers on the card.  I played around with some Heartfelt Creations dies and came up with a bunch of flowers and arranged them on a fancy lattice oval, also from Heartfelt Creations.  I used Copic markers to color pearls for the centers of 3 of the flowers and glued on some gold microbeads for the other 2.  Pearls are used for the bodies of the butterflies.  I added layered Spellbinders ovals with a printed “There’s only one like You”.  Then……the project started growing when they decided they wanted a shadow box, plus some personalization.  So using dies from Sue Wilson (Creative Expressions), including some leaves and the Swiss background die, I came up with this centerpiece that measures 6″x10″ and thought it would work in an 8″x12″ shadowbox frame.  Added a few extra flowers and another butterfly and I sent it off for approval. 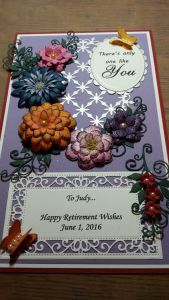 Then they decided that they would like something bigger……something that could be signed by all the co-workers at the company.  So back to the drawing board!  Still using the same centerpiece, I decided to go with a 16″x20″ shadowbox frame thus adding 5″ to each side for signatures.

In order to cover the backing board I had to use 4 sheets of 8.5″x11″ white cardstock and then used a ribbon to cover where the edges came together.  I had a purple dot wide grosgrain ribbon that matched the main center mat and used that.  Then I decided that it was too plain in the corners and used my Heartfelt Creations Blossom Corner die to cut 4 matching purple corners and accented them with pearls.  I decided to only attach them at the outer edges so that a note or picture could be tucked behind them. (That’s what the yellow note to the buyer is about.)  Anyway, here is the final project!  I was very pleased with it and think the buyer was, as well.  Hope you like it, too, and consider creating some flowers to brighten up your gloomy winter days. 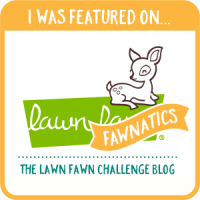 I was featured on the Lawn Fawnatics Challenge Board! 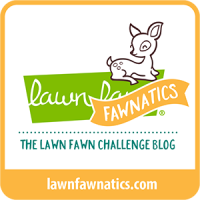 I participated in a Lawn Fawnatics Challenge!

All content, including designs, text, videos and photographs, are © Nancy Roth. My original designs are for personal use only, and may not be copied for any commercial purpose or publication without prior written permission. Thank you!
Loading Comments...
Comment
×
%d bloggers like this: